Federal authorities are investigating whether a parade of paintings and drawings, sold for years by some of New York’s most elite art dealers as the work of Modernist masters like Robert Motherwell and Jackson Pollock, actually consists of expert forgeries, according to people who have been interviewed or briefed by the investigators.

Most of the works, which have sold individually for as much as $17 million, came to market though a little-known art dealer from Long Island, Glafira Rosales, who said she had what every gallery dreams of: exclusive access to a mystery collector’s cache of undiscovered work by some of the postwar world’s great talents, including Mark Rothko and Richard Diebenkorn.

In several cases, Ms. Rosales sold the works through an art-world luminary, Ann Freedman, until 2009 the president of the prestigious gallery Knoedler & Company on the Upper East Side. Other works were sold by Julian Weissman, an independent dealer who had worked for Knoedler in the 1980s and had represented Motherwell when he was alive.

Ms. Freedman and Mr. Weissman said through their lawyers that they continued to believe that the works they sold were authentic and that authorities had told them they were not under investigation. But a lawyer for Ms. Rosales, Anastasios Sarikas, acknowledged that she was a target of the inquiry by the Federal Bureau of Investigation and the United States Attorney for the Southern District of New York. Mr. Sarikas said that his client had “never intentionally or knowingly sold artwork she knew to be forged.”

The Knoedler gallery, which abruptly closed Wednesday after 165 years in business, has not been implicated in the investigation. But on Friday a London collector, Pierre Lagrange, who bought one of the works, “Untitled 1950” by Pollock, for $17 million in 2007, sued the gallery and Ms. Freedman, contending that it is a forgery. His forensic analysis found that two paints in the work had not been invented until after Pollock’s death, the suit said.

“It’s a sad day when a venerable gallery goes out of business when confronted with the fact that it sold its clients a $17 million fake painting rather than stand by their client,” said Matthew Dontzin, Mr. Lagrange’s lawyer.

A Knoedler spokeswoman described the suit’s allegations of misrepresentation as baseless and said there was no connection between the suit and the timing of the gallery’s closing.

The authenticity of at least 15 other works brought to market by Ms. Rosales over a period of nearly two decades has been questioned by experts. People involved in the case said some collectors and dealers who purchased the works may have no idea there is any question about their authenticity.

The investigation has riven the art world and underscored how often even the experts cannot agree on a painting’s authenticity. In the case of seven Motherwells supplied by Ms. Rosales, for example, a nonprofit created by the artist, the Dedalus Foundation, has called them all frauds, citing conflicting stories about their provenance as well as forensic tests finding that some of the pigments were developed after the works’ supposed creation. Other experts, however, including a former Dedalus board member, have argued that some are genuine and that several have been widely seen at established art fairs.

Ms. Freedman said there was no better demonstration of her faith in the work than the purchase for her personal collection of three paintings from Ms. Rosales, a Motherwell, a Pollock and a Rothko, which she still owns.

Yet even now, neither Ms. Freedman nor Mr. Weissman can identify with precision the collector whom Ms. Rosales has said she represents. They acknowledged that they did not know of any paperwork that documented the provenance of those works. They have said they only know what Ms. Rosales has told them: that the works were bought by a unnamed collector in the 1950s directly from the artists.

In a letter written to Ms. Freedman in 2007, Ms. Rosales said the secret collector acquired the works on the advice of David Herbert, an art dealer who died in 1995. When the collector died, they were inherited by the owner’s son, whom she described as “a close family friend” who lives in Mexico and Switzerland and insists on remaining anonymous.

Whatever judgments are ultimately made, the case has already potentially devalued a fortune’s worth of art and entangled respected art-world figures in an embarrassing case.

At the center is Ms. Rosales, 55, who was born in Mexico and shares a home with José Carlos Bergantinos, an art consultant and collector from Spain with whom she once operated a gallery in Manhattan, exhibiting the work of artists like Pablo Picasso and Andy Warhol.

Ms. Rosales began bringing American masters to market as early as 1993. Over the next few years, she was the source of seven works on paper by Diebenkorn. She said they came from a defunct Spanish gallery, according to Richard Grant, Diebenkorn’s son-in-law and the executive director of the Diebenkorn Foundation.

But Mr. Grant said they were rejected by the committee that is assembling the definitive compendium of the artist’s work. “If we don’t have documented provenance of a work, we are immediately very skeptical,” he said.

“Over the years,” Mr. Grant said, “we have hoped that there would be some sort of investigation of this.”

A few years later, Ms. Rosales supplied an impressive string of works by Motherwell, Pollock, Rothko, Franz Kline, Clyfford Still and Willem de Kooning among others. Ms. Freedman at Knoedler handled at least 15 of the paintings, while Mr. Weissman sold three Motherwells to other established galleries, according to court records.

On occasion, the sketchy details about the provenance prompted potential buyers to seek authentication. In 2003, for example, a client of Knoedler was interested in a Pollock provided by Ms. Rosales but demanded it be evaluated by an independent organization, the nonprofit International Foundation for Art Research. The organization declined to authenticate it, citing insufficient information.

Jack Flam, president of Dedalus, and John Elderfield, a former curator at the Museum of Modern Art, said they initially saw no reason to question the Motherwells from Ms. Rosales that they viewed at Knoedler or Mr. Weissman’s.

But in late 2007, as more Motherwells from Ms. Rosales — all presented as part of his famed “Elegies to the Spanish Republic” series about the Spanish Civil War — came to Mr. Flam’s attention, he began to have his doubts.

In 2009, a forensic analysis of two paintings — one dated 1953 that Ms. Freedman bought, and another dated 1955 displayed at Knoedler — concluded that both contained pigments that were not “invented until at least 10 years after the date on the paintings,” according to court records.

After the analysis, Dedalus, which had deemed Mr. Weissman’s Motherwell as genuine two years earlier, changed its opinion. “If one of the paintings is wrong, then they’re all wrong,” said Mr. Flam. By that point, Mr. Weissman had already sold that “Spanish Elegy,” and when the foundation reversed itself, the buyer, Killala Fine Art from Ireland, wanted to back out.

By 2009, the F.B.I. had begun looking into the paintings, according to people briefed on the investigation who requested anonymity because they were not authorized to speak about it. That October Ms. Freedman resigned from Knoedler after 31 years. Her lawyer, Ronald Spencer, said that the investigation was not the cause. She now has her own gallery on the Upper East Side.

To settle the dispute with Killala, Mr. Weissman’s lawyer wrote a letter last year saying that his client learned that the collector was a John Gerzso, who lived in Mexico and Switzerland, and had inherited the work from his father. But Mr. Weissman did not know how to contact him, the lawyer said.

Federal investigators declined comment on whether they have been able to locate Mr. Gerzso and on other aspects of the case.

This year, when Killala’s own forensic testing cast doubt on the Motherwell it had bought, the gallery sued Mr. Weissman and Dedalus, demanding the return of the $650,000 paid for the “Spanish Elegy.” As part of a settlement this fall, Mr. Weissman and Ms. Rosales reimbursed Killala. At the insistence of Dedalus, the painting was branded a forgery in indelible ink on the back.

Mr. Weissman’s lawyer, Glenn Colton, said his client had been persuaded by ill health and financial difficulties to settle, rather than by evidence that the painting was a forgery. He complained that his client had not been permitted to review the forensic report and question its findings.

Mr. Sarikas said the allegations had unfairly hurt Ms. Rosales: “Since the Motherwell matter was made public, her ability to engage in this business — even with pieces beyond reproach and with absolutely sterling pedigree — has been severely circumscribed and damaged.” 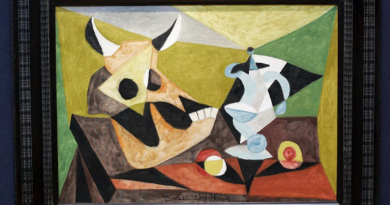