Restorers in Naples sold ads worth €3m, but failed to carry out work on the buildings

NAPLES. The Neapolitan restoration firm Grandi Progetti has earned around €3m by selling advertising on scaffolding with­out carrying out the work it had been hired to do. In April 2009 the company agreed a contract with the Church, the municipality and the Soprintendenza (the local arm of the Ministero per i Beni e le Attività Culturali [Mibac]) to restore the 1554 Church of Santa Maria di Portosalvo in the heart of Naples. The work was to be carried out for free and in exchange the firm would be allowed to generate revenue from selling space to advertisers. However, once the adverts were put in place, the work stopped.

Grandi Progetti’s contract with the city of Naples expired on 1 December 2011. For two-and-a-half years the company rented out space to advertisers for €100,000 a month, €60,000 more than the monthly revenue generated from the advertising that until recently hung on the exterior of the Doge’s Palace in Venice. In total, the company made around €3m, despite the fact that many formal complaints were filed against it, most notably by the civic committee of Santa Maria di Portosalvo and its president Antonio Pariante, who had been disputing the contract for two years. Despite public outrage, the scaffolding is still covered in adverts as the clause in the contract that covers this particular building is due to expire next month. The Soprintendenza has now brought formal charges against the firm in a bid to dismantle the adverts as soon as possible.

Grandi Progetti also failed to carry out restoration work on San Ferdinando, another Neapolitan church next to the Royal Palace, which is home to the Soprintendenza’s offices. This time the advertising revenue reached €1m. At the end of November, the Neapolitan inspector for architectural heritage, Stefano Gizzi, finally sent a letter of warning, and on 21 December the adverts were taken down. The town council has now launched an internal investigation following information obtained by Luigi de Falco, the councillor for the city’s historic centre. While the adverts on the church scaffoldings were approved by the Soprintendenza, they were never formally approved by the council’s board of advertising.

Also affected was the small island of Ischia, off the Neapolitan coast. The Cristo Redentore statue at the ferry port was draped with adverts by Grandi Progetti from 2010 to 2011 but was never restored.

Further investigations have revealed that Grandi Progetti is the same firm that, as reported by our sister paper Il Giornale Dell’Arte in 2009, won a three-year contract with Mibac in 2007 to restore 60 major monuments in 22 Italian cities including Milan, Venice and Turin, only to sell advertising space without carrying out the works. At the time the firm did business under the name Impredcost and was an unknown construction company from the small town of Caserta, in the Italian region of Campania, with no proven conservation experience. The contract was signed by Bruno De Santis, then the head of Mibac. The entire procedure was fast-tracked past government checks and watchdogs. The level of involvement between Mibac and Impredcost was such that the company was even using the ministry’s official headed paper, leading most city councils and regional supervisory bodies to assume that the firm was in official partnership with the ministry. After numerous complaints from various organisations and regulators, Mibac distanced itself from the contract without formally cancelling it. As a result, Impredcost was able to carry on until the contract expired in March 2010, by which time the firm had already disappeared and changed its name, to Grandi Progetti (in 2009). The April 2009 contract that secured the latest round of non-existent restoration works for Grandi Progetti was in fact signed by Impredcost shortly before the change of name.

This is not the first advertising-hoarding related scandal to take place in Italy. The Venice in Peril Fund, a British charity (whose chairman, Anna Somers Cocks, is the chief executive of this paper), spearheaded a protest that gathered widespread international attention against the Soprintendenza’s controversial fund­raising scheme, which allowed private companies to buy premium advertising spaces on major monuments and palaces throughout the city (The Art Newspaper, May 2011, p6). 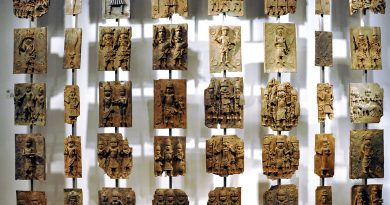 Fate of Detroit’s Art Hangs in the Balance