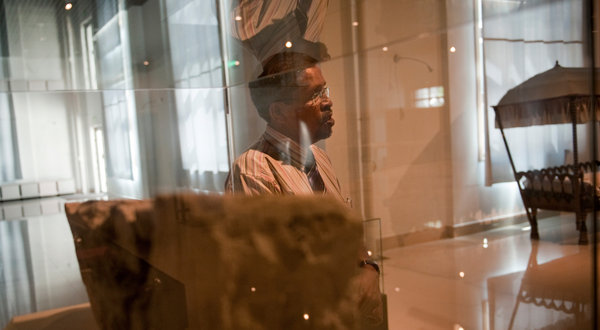 Ali Waheed, director of the National Museum, said all but two or three of nearly 30 Buddhist statues were damaged beyond repair. “The collection was totally, totally smashed,” he said.

MALE, Maldives — The broken glass from an attack by vandals on the National Museum here has been swept away, and the remnants of the Buddhist statues they destroyed — nearly 30 of them, some dating to the sixth century — have been locked away. But officials say the loss to this island nation’s archaeological legacy can never be recouped.

A neighborhood near the museum. 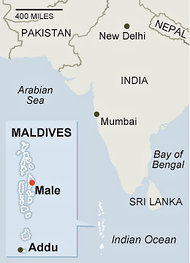 In the midst of the political turmoil racking this tiny Indian Ocean nation of 1,200 islands, a half-dozen men stormed into the museum last Tuesday and ransacked a collection of coral and lime figures, including a six-faced coral statue and a 1 1/2-foot-wide representation of the Buddha’s head. Officials said the men attacked the figures because they believed they were idols and therefore illegal under Islamic and national laws.

The vandalism was reminiscent of the Taliban’s demolition of the great carved Buddhas of Bamiyan in Afghanistan in early 2001, and it has raised fears here that extremists are gaining ground in the Maldives, a Sunni Muslim country that historians say converted from Buddhism to Islam in the 12th century. The country has incorporated elements of Islamic law into its jurisprudence for years. Idols cannot be brought into the country, for example, and alcohol and pork products are allowed only at resorts that cater to foreigners.

The statues were destroyed on the same day that Mohamed Nasheed, who won the presidency in 2008 in the country’s first democratic election, resigned his office. Mr. Nasheed said he was forced to do so in what amounted to a coup; his opponents say he went voluntarily. For nearly a month leading up to his resignation, Islamic and other opposition political parties staged protests. Some of them criticized Mr. Nasheed for not cracking down on brothels that masquerade as massage parlors and for proposing that hotels be allowed to serve alcohol on islands where Maldivians live; under current law, alcohol can be served only at the airport or on resort islands with no native population.

Ali Waheed, the director of the National Museum, which was built by China as a gift to the country, said on Monday that officials might be able to restore two or three of the damaged statues, but that the rest were beyond repair. “The collection was totally, totally smashed,” Mr. Waheed said. “The whole pre-Islamic history is gone.”

There were conflicting reports on Monday about whether suspects had been arrested in the case. Mr. Waheed said five men were caught at the museum, but a spokesman for the police, Ahmed Shiyam, said on Monday that investigators were still collecting evidence and had not made arrests.

Naseema Mohamed, a historian who retired from the museum last year, said the loss was particularly devastating because many of the country’s ancient artifacts, dispersed across the archipelago, had been lost or destroyed over the years by local people and rulers. “There was very little left,” she said.

Mr. Waheed said that typically, two or three artifacts of the country’s Buddhist heritage are discovered a year, generally during construction of homes and other buildings.

Both Ms. Mohamed and Mr. Waheed said that in recent years, some conservative Muslims had suggested removing the statues from the museum, but that there had never been any threats made over the statues. Abdul Majeed Abdul Bari, who was minister of Islamic affairs for the Maldives until last week, said that the country’s laws specifically exempt ancient figures from the regulations governing idols. “This is our heritage, and it has to be protected for future generations,” he said.

Officials of Adhaalath, an Islamist political party that took part in protests against the Nasheed administration, condemned the vandalism of the statues. Though the party has criticized what it called Mr. Nasheed’s anti-Islamic policies, it said it had never objected to the presence of the statues in the museum.

“We are very concerned about it,” Mohamed Iaad Hameed, president of the party’s trade and economic development committee, said in an interview on Monday. “And we as a party are fully against extremism.”

Mr. Waheed, the museum director, said scholars and museums in a number of countries had already offered help in restoring the damaged statues.

Cincinnati Enquirer Lays Off Last Of Its Arts Critics