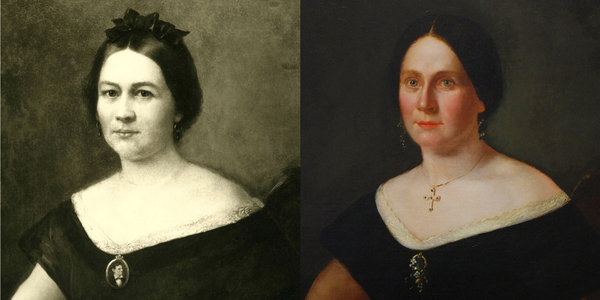 For 32 years, a portrait of a serene Mary Todd Lincoln hung in the governor’s mansion in Springfield, Ill., signed by Francis Bicknell Carpenter, a celebrated painter who lived at the White House for six months in 1864.

A Lady, but Not a First Lady

As the conservator Barry Bauman removed paint added to the portrait advertised as being that of Mary Todd Lincoln, a brooch depicting Abraham Lincoln disappeared.

The story behind the picture was compelling: Mrs. Lincoln had Mr. Carpenter secretly paint her portrait as a surprise for the president, but he was assassinated before she had a chance to present it to him.

Now it turns out that both the portrait and the touching tale accompanying it are false.

The canvas, which was purchased by Abraham Lincoln’s descendants before being donated to the state’s historical library in the 1970s, was discovered to be a hoax when it was sent to a conservator for cleaning, said James M. Cornelius, the curator of the Lincoln library and museumin Springfield. The museum is planning to present its findings at a lecture on April 26.

“It was a scam to defraud the Lincoln family,” Mr. Cornelius said.

The Lincolns were not the only ones fooled. Ever since The New York Times announced the portrait’s discovery in 1929, on Feb. 12, Lincoln’s birthday, historians and the public have assumed it depicted Mary Todd Lincoln. It was reproduced in The Chicago Tribune and National Geographic, and versions of it still illustrate at least two biographies, including the latest paperback edition of Carl Sandburg’s 1932 “Mary Lincoln: Wife and Widow.”

In reality, the painting depicts an unknown woman and was created by an anonymous 19th-century artist, saidBarry Bauman, the independent conservator who uncovered the fraud. The con, however, dates to the late 1920s, when the portrait was recast as that of Mrs. Lincoln, he said.

Mr. Bauman identifies the culprit behind the scam as Ludwig Pflum, who rechristened himself Lew Bloom and was given to the kind of self-invention that America became famous for during the industrial era. He worked as a jockey, circus clown, boxer and vaudevillian before settling on art collecting.

When he died less than a year after the painting’s public unveiling, an obituary in a Reading, Pa., newspaper noted that he “dabbled in oil paintings.” Apparently he dabbled more than anyone at the time realized.

Mr. Bauman, who offers his services pro bono to museums and nonprofit groups, said he believed that Mr. Bloom altered the subject’s facial features; painted over some accessories, including a necklace with a cross; and added a brooch with the president’s picture.

Mr. Bloom concocted a story to accompany his handiwork, saying that Mrs. Lincoln surreptitiously approached Mr. Carpenter while he was at the White House working on his 15-by-9-foot painting, “The First Reading of the Emancipation Proclamation,” which hangs in the Capitol. She had planned a party, he said, where she would give the portrait as a surprise to her husband.

But, as the story went, after John Wilkes Booth shot the president at Ford’s Theater on April 14, 1865, the distraught and impoverished first lady asked Mr. Carpenter to dispose of it. Mr. Carpenter, Mr. Bloom claimed, sold it to a wealthy Philadelphia family, the Neafies, who in turn gave it to Mr. Bloom’s sister Susan, in thanks for her nursing a relative through a long illness.

Mr. Bloom attached a notarized affidavit attesting to this fabricated history on the back of the painting before exhibiting it as a “never-before-seen-portrait” in 1929 at Milch Galleries in Manhattan. “Bloom knew he could get away with it, for all of the individuals mentioned in the affidavit were dead,” Mr. Bauman said. “The smoking gun,” he explained, was that Mr. Bloom’s sister had been only 5 when the Neafie relative died.

Mr. Cornelius explained that the Lincoln family was an easy mark at the time. The president’s only surviving son, Robert Todd Lincoln, had died in 1926. Robert’s widow, Mary Harlan Lincoln, was still trying to stifle negative publicity about the Lincolns and even paid to squelch a series of articles about Robert’s institutionalizing his mentally unstable mother against her will in 1875. So Mr. Bloom most likely assumed that something that presented Mrs. Lincoln in a sympathetic light would appeal to the family, Mr. Cornelius said. Robert’s daughter, Jessie, bought the painting for $2,000 to $3,000.

It remained in the family’s hands until 1976, when Lincoln’s last living descendant, his great-grandson, Robert Todd Lincoln Beckwith, gave the portrait to the Illinois State Historical Library (since renamed the Abraham Lincoln Presidential Library and Museum).

The portrait was then sent to the Art Institute of Chicago, where conservators quickly realized that significant parts of the canvas had been retouched.

The underlying portrait, they found, was of a different, plainer woman and painted in a different style. She was wearing a cross, which would have been a bit odd for Mary, a Protestant. They also recognized that a brooch featuring the president’s picture that Mrs. Lincoln wore in the retouched painting had been added later.

Harold Holzer, a Lincoln scholar, said that Mrs. Lincoln always hated the 1857 photograph on which the brooch’s likeness of the president was based, complaining about “the disordered condition of his hair.”

“If Frank Carpenter had ever produced a picture with that image, Mary would have broken it over his head,” Mr. Holzer said.

But if the Art Institute conservators suspected fraud, there is nothing in their correspondence to indicate it, Mr. Cornelius said. In letters from 1977 and 1978, they suggest that the changes were the result of “heavy-handed” restorers who had preceded them. As for the lack of resemblance to Mrs. Lincoln, a conservator wrote that “many an artist idealizes their sitter.”

The state historian at the time, William Alderfer, instructed the conservators to leave in both the Lincoln brooch and the cross, and the reworked painting was then hung in the governor’s mansion.

As it turns out, Mr. Bauman remembers the painting’s being worked on when he was an assistant conservator at the Art Institute in 1977 and 1978. Although there is no mention of the artist’s signature in the letters, he said his predecessors must have noticed that “F. B. Carpenter” had been added later, because it clearly had been placed atop the original varnish.

Musing on why they did not delve deeper into the inconsistencies, Mr. Bauman said that conservators often considered the objects they worked on like foster children. “We didn’t create them, but somehow they become part of our lives, and we want to see them succeed,” he said.

Last May Mr. Cornelius visited Mr. Bauman’s studio, and the two men discussed what Mr. Bauman had found. They stared at the portrait for a long while, Mr. Bauman recalled; then Mr. Cornelius declared, “It’s not Mary Lincoln.”

Mr. Bauman replied, “Not only is it not Mary Lincoln, it’s not Francis Carpenter.”

The restored portrait will not be returned to the governor’s mansion, Mr. Cornelius said. The original painting of the now unknown woman may be hung in the Lincoln library. It has lost most of its value (it is insured for $400,000), he said, but it still comes with an intriguing story.

And this one has the benefit of being true.

This article has been revised to reflect the following correction:

An earlier version of this article misidentified Barry Bauman’s role at the Art Institute of Chicago in 1977 and 1978. He was not an assistant curator.

Matisse in Norwegian museum was once Nazi loot

Controversial Statue Of Stephen Foster In Pittsburgh Comes Down